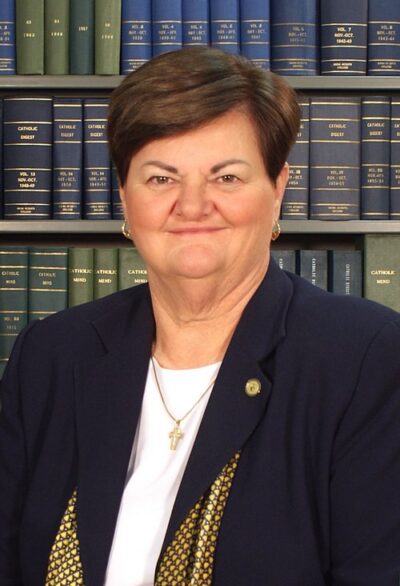 ADRIAN, Mich. – Siena Heights President, Sister Peg Albert, O.P., Ph.D., announces her retirement effective at the end of the 2022-2023 academic year. Her last day will be June 30, 2023. Albert has served as President of Siena Heights University for 16 years and will complete her 17th year at the time of her retirement.

Sister Peg Albert, O.P, Ph.D. was named the 10th President of Siena Heights University in 2006. She received a Bachelor of Arts degree in sociology from Wayne State University in Detroit, Mich., and master’s and doctorate degrees in social work from Barry University in Miami, FL. She did her post-doctoral work at the Institute for Educational Management at Harvard Graduate School of Education in Cambridge, Mass., and completed post-doctoral classes at Barry.

“My goals when I arrived on campus in 2006 were to develop the campus, develop trusting relationships with the people of Siena, and to grow enrollment. I have done my best to do so. Now it is time for someone else to take Siena to the next level. I have all the faith in the world that Siena will continue to grow with its new strategic plan, the STEER process, and the new program starting this summer for retention, Moving the Needle.  And, I know that my leadership team and the faculty and staff are committed to see Siena Heights grow into its future,” said Albert.

A few notable highlights include:

·         In 2009: Despite the national economic downturn that had many colleges and universities scaling back projects and initiatives, Siena Heights moved forward by beginning a nursing program. The fully accredited program now has pre-licensure, RN to BSN and MSN degree paths.

·         In 2010: Siena Heights announced it was starting a football program and would build a multi-purpose stadium and athletic complex to support it. Other new co-curricular programs followed such as bowling, lacrosse, cheer and dance, and marching band.

·         In 2013: The McLaughlin University Center was dedicated thanks to the generosity of several benefactors. This facility is the hub of campus.

·         In 2018: The Spencer Performing Arts Center opened to students and the community and modernized the Siena Heights performing arts program.

·         In 2019: Siena celebrated its 100th Anniversary with a year-long celebration that spanned across Michigan. This brought about the new Centennial Mall outside of Sacred Heart Hall.

·         In 2020: The university converted its former nursing building into the Patricia A Erickson Enrollment and Welcome Center and new majors such as exercise science, cybersecurity, and agroecology and sustainable agriculture began on the Adrian campus. Also, the university’s online program received national recognition from the U.S. News and World Report for the eighth consecutive year, and was the top-ranked program in Michigan for the past seven years.

·         In 2021: The SHU Global brand was introduced to the community as the student experience of educating professional working students. This includes undergraduate and graduate students at one of Siena’s several Michigan locations, as well as the national ranked Online Program.

·         In 2022: The “Being Bolder, Reaching New Heights” five-year strategic plan began which includes initiatives ranging from areas like innovation to marketing/branding to diversity and inclusion. All these efforts are focused on making a better university and will position Siena Heights University for a sustainable future. This comprehensive plan also includes a university-wide formal examination of the university’s curricular and co-curricular activities.  Representatives from all areas of the university, including the strategic plan partner, Credo, are involved in the process.

These are just a few of the notable highlights from Albert’s legacy at Siena Heights University. These accomplishments were made possible with the help of her President’s Cabinet team and the Siena community, which is a testament to her collaborative leadership style and her focus on facilitating change rather than imposing it.

Board Chairperson, Dusty Steele – “It is with mixed emotion that I learned of Sister Peg’s retirement.  As President, her accomplishments were many, but nothing more significant than the multitude of relationships she developed with students, faculty, staff and members of the greater community.   On behalf of the Board of Trustee’s, we greatly appreciate all she has given Siena Heights University and we are grateful to have her leadership for the next year.”

Albert says, “We still have a great deal of work to do this coming year to assure Siena’s sustainability. I will continue to work as hard as I ever have this coming academic year. The 2022-23 academic year will be a busy one for all of us as we continue to implement all the plans we have made for Siena’s future as we move into the next 100 years!”

The Siena Heights University Board of Trustees will prepare for the presidential search to begin this summer.